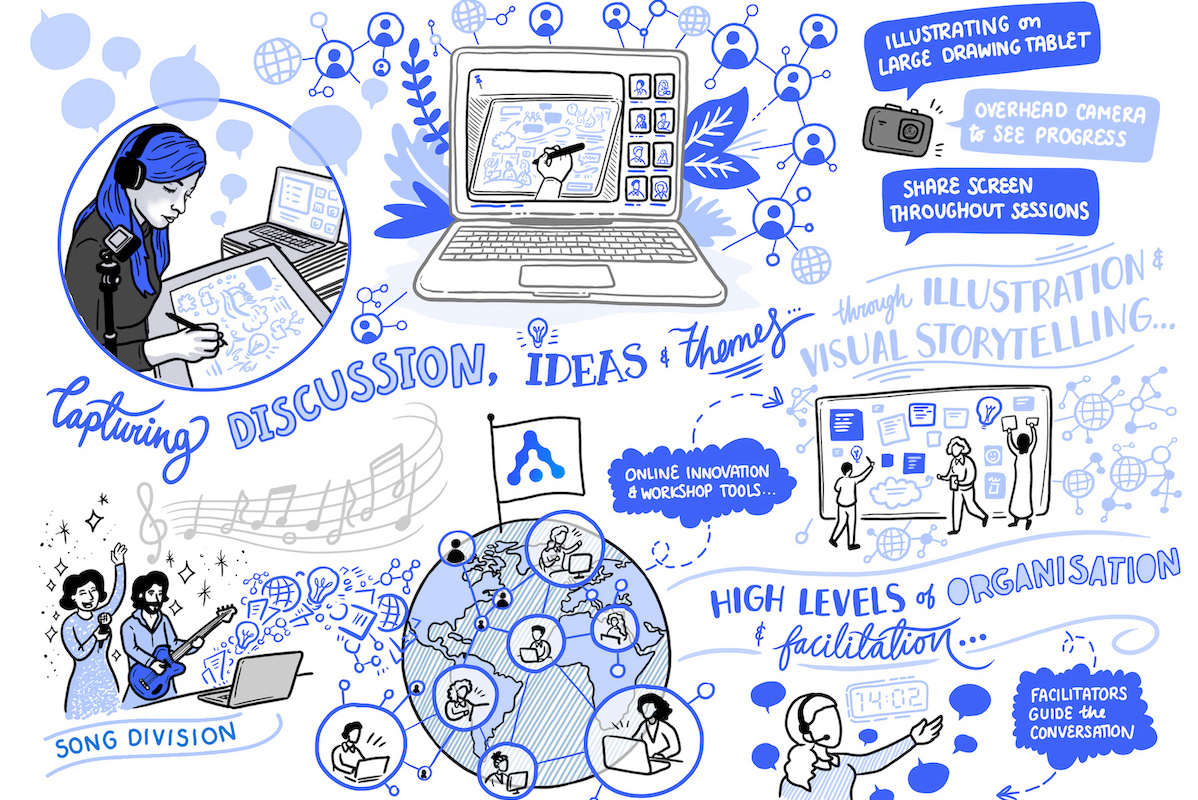 Mind Mapping and Engagement in the Virtual Meeting World

The role of the live scribe has changed very little in the virtual world.

Whether in a physical meeting or a virtual meeting, I’m there to capture the discussion points, themes and ideas raised through illustration and visual storytelling.

As the discussion takes place, I’m working away on a large drawing tablet, capturing ideas through illustration and mind mapping. Typically, it is up to the moderator to prompt me to share my screen with the audience when they feel it is appropriate.

During live meetings, I tend to sit in the corner of the room and people can look over my shoulder at any point during the session. With the shift to virtual, I’ve made some technology adjustments, adding a GoPro that sits over my shoulder to share my screen with the audience attending the virtual session.

For various reasons, I’m not sharing my screen the whole time, although audience members can look at the progress at any point in the discussion. One reason is constant sharing can become intrusive. Another, more technical challenge is that with virtual meetings if I am sharing my screen all the time, no one can share slides.

Some things change, some stay the same

Virtual has undoubtedly had an impact on the dynamic in some ways, but largely my role has stayed the same. The biggest change obviously has been the technology and with that the way meetings now need to be facilitated. As I work across so many different industries, I have experienced many different ways of running virtual events, some good, some bad.

The work I have done with Open Audience has really stood out because the level of organisation and facilitation has been more effective than in any other meetings I’ve attended.

The production level has been of the highest quality and the inclusion of different ways of engaging the audience really resonated. For example, a group called Song Division were involved with one meeting, using live music to engage and reflect on what was being said in the sessions.

Other interesting developments in the virtual space have been the use of innovative tools to replace whiteboards or post-it notes, particularly during workshops where attendees are asked to ideate and innovate.

Breakout rooms have also become widely used tools to enable people to connect in smaller groups, in much the same way as they would do in live meetings when they are asked to break into smaller groups.

Interestingly, as an observer there to capture the discussion visually, I have found these breakout rooms to be much the same as in physical meetings – people take a bit of time to get going and once the ice has been broken, the discussion starts to flow.

The better the facilitation, the more engaging the discussion, the easier it is for me to do my job. Good meetings facilitators guide the conversation in the right way and introduce topics in the right way. If audience members are fully engaged then what is being said is interesting and engaging, which means I can capture and record engaging, exciting topics and ideas.

And that has been my experience with Open Audience, that they engage the audience more effectively than other meetings facilitators do. In fact, one of the Open Audience meetings I was scribing for was a four-hour session yet it felt like 20 minutes because it just flowed so well.

Amber Anderson is a multi-disciplined illustrator with more than seven years of experience working across both commercial and independent settings. Through live scribing, Amber helps to bring ideas to life at conferences, events and workshops globally and across almost every industry. In addition to live scribing, Amber has illustrated books, painted murals for public and commercial spaces, developed visuals for concepts, storyboarding, presentations, websites and video, and illustrated board games, water bottles and t-shirts for many well-known brands.